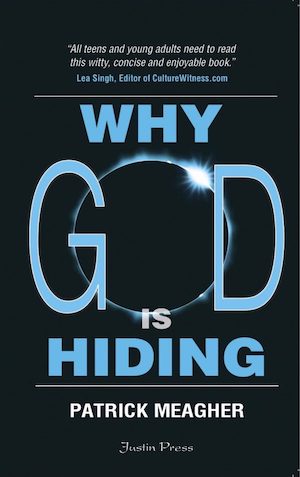 Why God Is Hiding

In Why God Is Hiding, “Patrick Meagher considers the fundamental questions that confront all of us on our solitary pilgrimage; better, he provides short, pithy answers to those troubling questions, answers steeped in common sense and orthodox Christianity.” ~ Ian Hunter

Why God Is Hiding

Atheism and How it Almost Ruined My Life

Patrick Meagher considers the fundamental questions that confront all of us on our solitary pilgrimage; better, he provides short, pithy answers to those troubling questions, answers steeped in common sense and orthodox Christianity.” ~ Ian Hunter, lawyer, columnist and author has practised and taught journalism and law in Canada for 40 years

All teens and young adults need to read this witty, concise and enjoyable book.” ~ Lea Singh, Editor of CultureWitness.com

PATRICK MEAGHER is an award-winning Canadian journalist and author of Perhaps, I Love You More, a collection of anecdotes about Pope John Paul the Great.
Meagher has worked across Canada for newspapers, magazines and in radio, including CBC, and is the publisher of Farmers Forum, an Ontario agricultural newspaper.
He has worked as an associate editor of Mercatornet.com, an Australian-based social commentary website, business editor of The Bermuda Sun, and as managing editor of Toronto-based Catholic Register.
He and his wife and their seven children live in Ottawa, Canada.

WHY GOD IS HIDING: Atheism and How it Almost Ruined My Life

This is the book I was looking for but couldn’t find when I was in high school. These are the arguments I wanted and needed to sort out the meaning of life. They are compiled here for today’s high school, college and university students who are sick and tired of all the junk that’s fed to them about life, the universe and nearly everything that matters. I was sick and tired of it all too but that was the 1980s. It’s much worse now. Much of what students hear today in the classroom about the important questions of life is wrong and by consequence is not contributing to their happiness.

By the time teenagers finish high school, if they are not already atheists, many of them will be when they finish college or university. Atheism is the existential default position on campuses. I don’t think it should surprise anyone that when you wrestle a purpose-filled life out of the hands of the heroes who created the Western World and turn the wonders of this world into an accident that just happened, we get people who believe in nothing (agnosticism) or who take the cynical next step and believe that God doesn’t exist (atheists). And when you believe in nothing, you’re willing to accept anything.

The sheer number of aimless young people who abuse drugs, alcohol, sex, or are addicted to the virtual worlds of video games, texting and Internet pornography  or who are on medication for depression,  should shout to us that there might be a correlation between killing a purpose to life and one’s psychological well-being.

I believe that the more one thinks about things that really matter the more obvious it becomes that God has designed everything, the beauty of nature and the human spirit, to convince us of who He is. But that’s the catch. You have to think about it to really get it. In today’s Ipod, Internet, smartphone and video world, the average teenager spends more than seven hours a day using a screen for entertainment.  Who has time to think about supernatural things? Perhaps you do and, perhaps, you’ve already realized that the truth is not for intellectual slackers and is very often counter-cultural. Dear reader, this book is for you.

CHAPTER 1: My Search For The Meaning Of Life

We all have adventure stories in our lives and they can be instructive. Even my miserable little story. How I ended up peering into the gates of hell began from a moment of seemingly harmless teenage fun. My friends and I would argue about anything and everything. Usually it was in the school dressing room after basketball practice. This time, we were in the high school hallway between classes when Paul told me: “The only reason why you believe in God is because your parents do.”

I remember the moment because two other friends took Paul’s side and I surprised myself with my anger as we traded barbs. Back and forth we went, interrupting each other as often as we made a point or repeated one.

“I believe in God because it’s a fact,” I almost shouted.

“Prove it,” Paul replied with such a confident grin that I wanted to hit him.

“It’s obvious. God is everywhere.” I could feel my cheeks turning red because I knew I was not proving anything. They smiled at my explosion and encouraged each other with one-line rebuttals. I couldn’t keep up.

“Well, I don’t see him,” Paul replied with more of that irritating self-confidence. “Where is he?”

The school bell rang. Saved by the bell, but I walked away with a sinking feeling because, not only did I not convince my friends, I didn’t even convince myself. I never told them that I thought a great deal about what they had said and I never told them that eventually I realized they were right. I believed because of my parents. It was the beginning of my turning away from God, a terrible mistake that turned my life story into a tragedy. I eventually stopped talking to God. That was replaced by painfully overanalyzing. I withdrew from my friends, wasted a lot of time, pondered atheism and became pathetically self-centred, unhappy and suicidal.

The decline began slowly. As a university student I sometimes commented philosophically over a few beers in the pub that “before you know it we’ll all be dead.” I was looking for feedback. I wanted an answer to that problem. It was the wrong place to ask a philosophical question. University pubs, like university campuses, were filled with people like me. No idea of who they are or where they are going and most don’t care, or at least act like they don’t. Many students end up on campus simply because “that’s what you do” after high school. Their opinions tend to agree with who makes the most noise. Everyone wants to be tolerant and nonjudgmental but the hypocrisy of that reeks on every campus. No one wants to impose their morality but, of course, “everyone” knows the pro-lifers should be banned.

I found that liberal arts courses were led by too many professors who spent too much time considering man’s motives. When they reached for the more important questions, they shrugged off answers to the problem of life with a variation of “this life is all there is.” I had a problem with that because there’s no evidence for it. But I had a bigger problem because I was beginning to feel desperate and deep down I felt there had to be more. I believed in ghosts, after all. I was convinced we are more than our blood and bones. I was certain that at death we disposed of our bodies and went, well, somewhere. I blame this belief on campfire confidences. I was tainted by too many stories on starry nights when friends confided supernatural experiences, such as a friend’s certainty of the sudden presence of a dead relative. Perfectly sane people were convinced of supernatural events. It seemed that so many of us had them: The sudden inexplicable shuddering at the thought of evil when talking about the devil. Or the unexpected sense of the presence of goodness and joy at the strangest of moments and that same sudden overflowing wave of joy that I had experienced when I prayed as a child.

I tried book stores (yes, there was life before the Internet) but found all the wrong books. You can find millions of ideas in book stores, but try to find answers to the big questions in life. Most book stores give more space to witchcraft. The books I did find were by philosophers who didn’t get to the point or answer my questions. Or they were famous for converting to a form of unbelief.

I talked to Christians on campus, which in my case was a mistake. The ones I met all argued from the Bible. But I had already read the Bible from beginning to end and read some books of the Bible more than once. It seemed that everybody had his own version of what God was trying to say. Furthermore, I didn’t understand a lot of it, and throwing a Bible verse at someone who needs convincing is very unconvincing. Like so many people struggling to find the truth I had the biggest trouble with parts of the Bible that seemed to be really clear and made the most sense.

“Love the Lord your God with all of your heart and with all your soul and with all your mind and with all your strength. The second is this: Love your neighbour as yourself.” (Mark 12: 30–31)  That passage made perfect sense to me. I wanted in. But as I thought about it I didn’t think I knew anyone who gave God so much credit. There was something I must be missing. I soon read what was to become my favourite passage of the Bible: “Be joyful always. Pray continuously. Give thanks in all circumstances for that is God’s will for you…” (1 Thessalonians 14–16). But at the time I distinctly remember my sudden revulsion when my own thoughts shouted back at me: “Nobody lives like that!”

And if nobody lives like that, why should I be the only sucker? That is when I made the biggest blunder of my life. I did what I thought every reasonable person around me had already done. I gave up. I stopped looking, stopped asking. It was a mistake I would pay for, for 10 years.

There are no reviews yet.

Be the first to review “Why God Is Hiding” Cancel reply